Welcome back to the Real Estate newsletter. There’s an odd new trend happening lately: More and more of Southern California’s iconic estates are getting auctioned off.

It’s a real estate tale as old as time: A developer shoots for the stars with an overly ambitious project and racks up millions in debt on the property. But now they’re being forced to sell them at foreclosure auctions to make up the debt.

Two such incidents were the week’s biggest headlines, and one broke the record for the priciest house to ever be auctioned off. Known as the Hearst estate, the famous mansion tied to William Randolph Hearst once listed for $195 million but ended up selling to the highest bidder at a Los Angeles courthouse after the owner, attorney Leonard Ross, accrued around $50 million in debt on the property. The highest bidder turned out to be “homeless billionaire” Nicolas Berggruen, a think tank founder who earned his moniker with his jet-setting lifestyle and lack of a permanent address.

The other home marked for auction is a bit more infamous. It’s Mohamed Hadid’s 30,000-square-foot mega-mansion dubbed “Starship Enterprise” by angry neighbors who feared the code-violating structure would slide down the hillside and crush the homes below. A judge ordered it to be torn down in 2019, and the land it sits on will be auctioned off on Oct. 1. It’s a prime piece of dirt, so get your bids in now.

William Randolph Hearst died 70 years ago but still somehow dominated multiple headlines this week. The Herald Examiner Building he constructed over a century ago in downtown L.A. for his newspaper has been restored to public life and counts Arizona State University among its tenants.

The other commercial real estate scoop of the week came in Hollywood, where developers filed an application for a $500-million high-rise on Sunset Boulevard called the Star. Spanning 22 stories, the bubble-like world of glass would include four levels of gardens and a funicular tram to a rooftop restaurant. The photos alone are worth a click — or even an L.A. Times subscription.

Billionaire is the highest bidder for Hearst estate 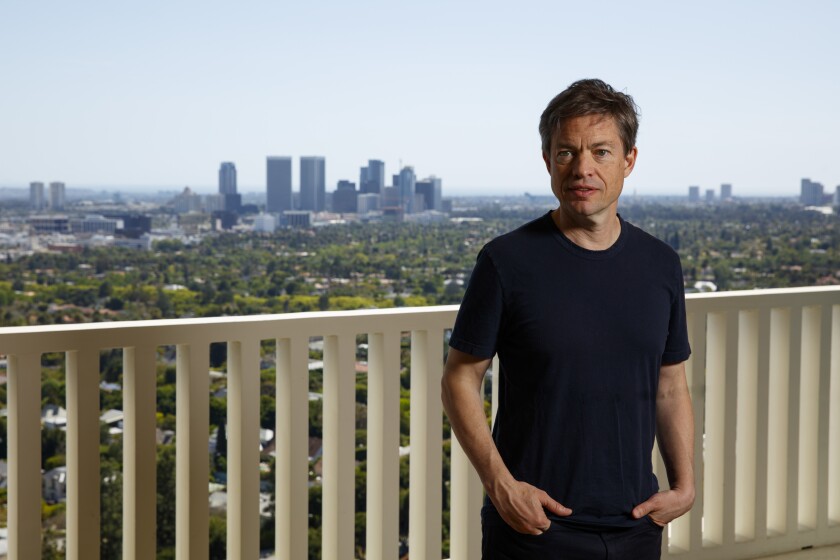 Investor and philanthropist Nicolas Berggruen is one of the richest men in the world.

Real estate investor Nicolas Berggruen just shelled out $63.1 million for the Hearst estate in Beverly Hills, winning the prized property in a bankruptcy auction that was more competitive than some expected.

The cofounder of the Berggruen Institute think tank beat out five other bidders at the Edward R. Roybal Federal Building and U.S. Courthouse in downtown Los Angeles on Tuesday in a heated auction that lasted around 45 minutes.

Twenty-four people — the bidders along with attorneys and agents — crowded into the courtroom, and a few others watched the action on a monitor in an overflow room, said Anthony Marguleas of Amalfi Estates, who held the listing on the estate.

The bidding began at $48 million — $1 million more than Berggruen’s original offer, which was accepted by the seller, triggering a Chapter 7 bankruptcy sale through auction.

Hadid’s mega-mansion next up for auction 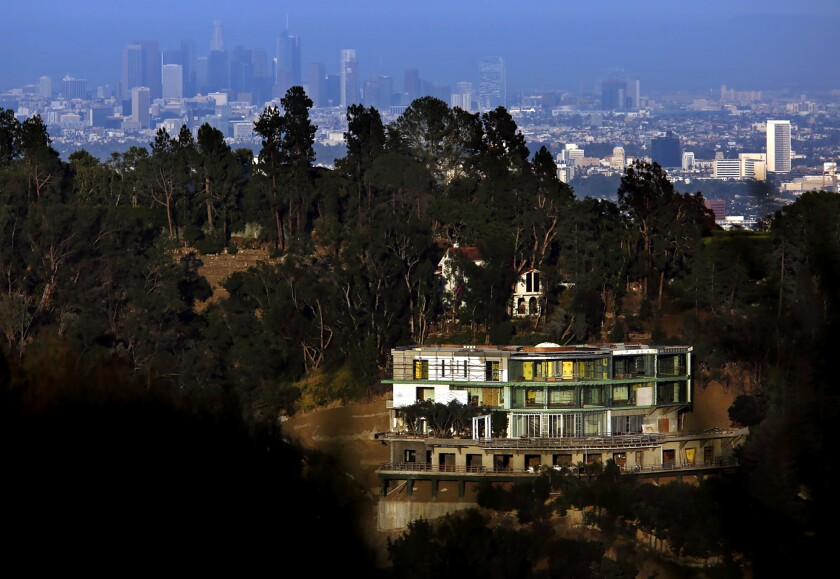 The unfinished mansion at 901 Strada Vecchia Road in Bel-Air is shown in 2017.

“This house will last forever,” developer Mohamed Hadid once said about his 30,000-square-foot mega-mansion perched in the hills of Bel-Air. “Bel-Air will fall before this will.”

An L.A. County court disagreed in 2019, declaring the massive, unfinished structure a “danger to the public” and ordering it to be torn down. Now, the infamous estate on Strada Vecchia Road will be auctioned off to the highest bidder.

The auction is the latest, and perhaps final, chapter in a saga that stretches back years and is filled with criminal charges, government investigations and heated courtroom battles. The 1920s estate includes a main house, two cottages, a bungalow and a two-story guesthouse set among fountains and koi ponds.

In one of Beverly Crest’s biggest deals so far this year, director Joseph McGinty Nichol, better known as McG, has paid $14.7 million for the iconic Bella Vista estate. He bought it from actress Donna Scott.

The sale ends a six-year marketing journey for the 95-year-old Spanish villa. It first surfaced for sale in 2015 for $42.5 million along with seven acres of land. With no takers, the price and land size were steadily reduced; it most recently listed earlier this year for $15.5 million on one acre.

It’s a natural landing place for McG, director of the films “Charlie’s Angels,” “We Are Marshall” and “Terminator Salvation.” Since the home was built in 1926, a parade of actors and filmmakers from different eras of cinema have lived there. 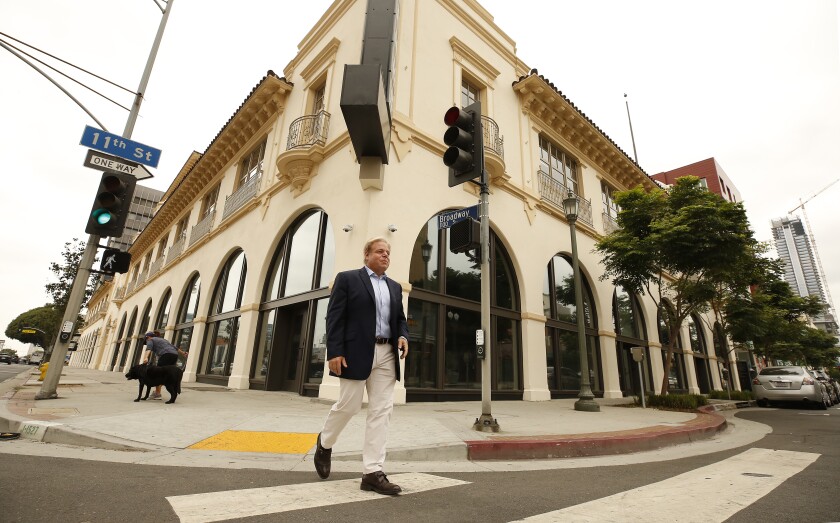 The landmark building that publishing titan William Randolph Hearst built for his Los Angeles newspaper over a century ago has been restored to public life as surging development in its downtown neighborhood brings new apartments, hotels and offices, writes Roger Vincent.

Completed in 1914 on South Broadway, the Herald Examiner Building was the first collaboration between Hearst and architect Julia Morgan, who went on to design his palatial Hearst Castle estate in San Simeon, Calif. The newspaper folded in 1989, and the property became a popular filming location for cop shows, sitcoms and movies.

New York developer Georgetown Co. purchased a stake in the architectural gem from Hearst Corp. in 2015 and partnered with the newspaper chain on an $80-million project to redevelop the building into offices for rent and ground-floor restaurants, said Michael Fischer, a senior vice president at Georgetown who oversaw the project.

Arizona State University moved in last month as the office tenant and now has room to educate as many as 500 students a day, said Maria Anguiano, senior vice president of enterprise strategies. An artist’s rendering shows the proposed $500-million Hollywood high-rise the Star, which would include a tram to a rooftop restaurant.

Developers filed an application with the city of Los Angeles on Thursday to build what they hope will be a visually stunning, $500-million high-rise on Sunset Boulevard in the heart of Hollywood called the Star, writes Roger Vincent.

The proposed 22-story glass-skinned office tower would create its own bubble-like world with garden levels open to the elements on the 10th and 17th floors and an enclosed landscaped rooftop with a restaurant, all served by a funicular tram traveling up and down the sides of the tower.

It’s a creation of MAD Architects, a Chinese architecture firm known for daring designs such as the Lucas Museum of Narrative Art, under construction near the Los Angeles Memorial Coliseum, which evokes director George Lucas’ “Star Wars” fantasy empire.

Architect Ma Yansong called the curvy shape of the building “very sculptural,” reminiscent of a sunrise “or a sunset,” he said with a laugh. “It’s on Sunset Boulevard.”

For the first time in over a year, U.S. home sales are down, MarketWatch reports. Prices are still rising, but the selling slowdown might be an indicator of a cooling market.

In 2016, golf course communities were doing so poorly that developers were donating the courses to national parks for the tax break. The pandemic changed everything, however, with millions trying golf for the first time and many ending up buying properties on the links. Bloomberg has the story.