Welcome back to the Real Estate newsletter. In this world, there are only a few things you can count on. The sun will rise in the morning. The skies will rain the day after you wash your car. And Ellen DeGeneres will simply not stop flipping houses.

The talk show host and her wife, Portia de Rossi, are back at it in Beverly Hills Post Office, where they just paid $8.5 million for a picture-perfect Midcentury. The word’s still out on what they’re planning, since the modernist retreat was renovated in recent years.

The week’s other winner was rapper French Montana, who sold his Hidden Hills home for $5 million five years after buying it from Selena Gomez. During his stay, he decked the place out with a $400,000 recording studio.

Both deals, however, pale in comparison to the price that Charlie Fries’ former estate is chasing in Beverly Hills. The 90-year-old manor, which was once owned by Paramount Pictures, surfaced for sale at $25 million and comes with a stellar pool house designed by the great Paul Williams.

For those of us renters who can’t quite afford to drop $25 million, good news is coming even as the eviction moratorium expires on Oct. 1. Tenants and landlords can now apply for the state’s Housing Is Key rental assistance program, which can cover 100% of back rent and three months of future payments. The Times has you covered on everything you need to apply.

And while we’re talking about affordable housing, keep an eye on what’s happening in Washington, where the Biden administration unveiled a plan to create and rehabilitate more than 2 million housing units. The ambitious program hopes to offer more options for those who have been priced out of a housing market that soared during the pandemic. 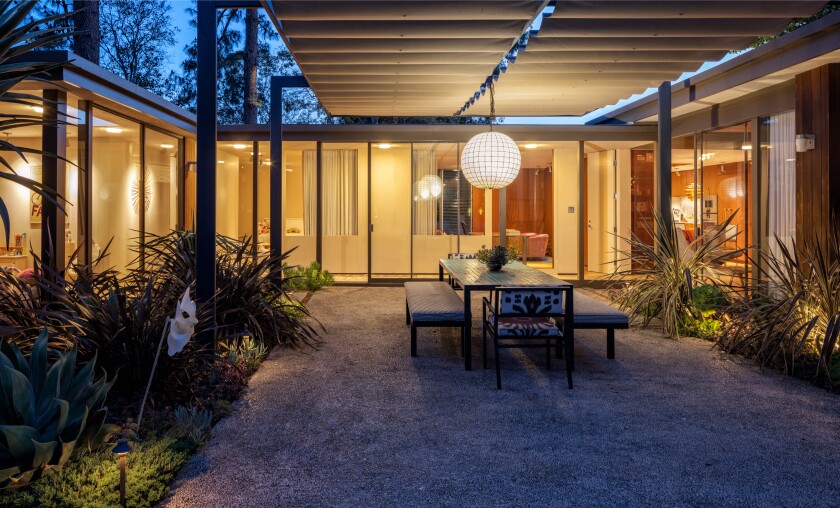 The ’60s stunner was built by Robert Skinner and photographed by Julius Shulman for the book “Modernism Rediscovered.”

The pair are on a hot streak. Late last year, they made a $6.3-million profit on a $33.3-million Montecito compound, and in April, they sold the former Beverly Hills mansion of Adam Levine for $47 million — or $4.5 million more than they paid for it.

They purchased this one from talent agent Greg Cavic, who brought the Midcentury gem to market in July for $9.35 million. Tucked in the gated enclave of Hidden Valley Estates, the 1960s stunner was built by Robert Skinner and later found fame after being photographed by Julius Shulman for the book “Modernism Rediscovered.”

It’ll be interesting to see the changes DeGeneres and De Rossi have planned because the residence underwent a recent renovation by architect John Bertram and designer Sarah Shetter, who brought in Douglas fir furniture, terrazzo floors, new fixtures and vibrant redwood accents both inside and out. 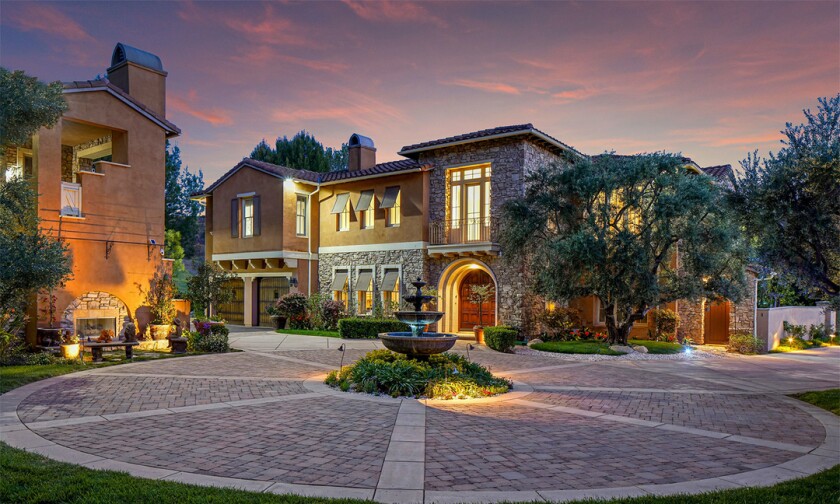 Spanning 3 acres, the property includes an 8,600-square-foot home, custom recording studio and resort-style backyard with a pool and spa.

Rapper French Montana has another hit on his hands in Hidden Hills, where he just sold his custom compound on three acres for $5 million.

Montana, whose hits include “Pop That” and “Unforgettable,” decked the place out with a $400,000 recording studio during his stay. He also reined in the interiors, replacing shades of purple and turquoise with a more neutral gray. 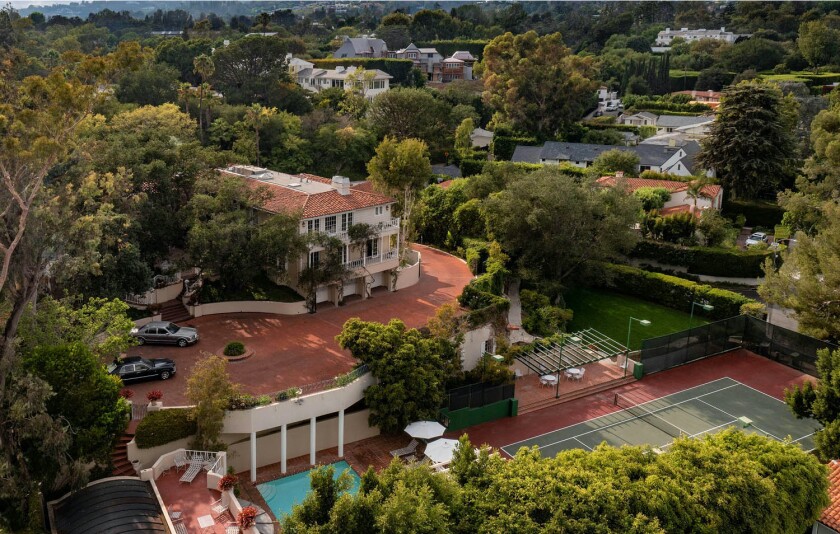 The 1.2-acre residence includes a main house with a movie theater, as well as a pool house designed by prolific architect Paul Williams.

This 90-year-old mansion sits in Beverly Hills, but its roots are tied to Hollywood. Owned by Paramount Pictures in the 1960s and more recently by producer Charles Fries, the 13,000-square-foot residence just surfaced for sale at $25 million.

That’s nearly five times the $5.625 million that Fries paid for it back in 1989. The prolific producer, responsible for the “Amazing Spider-Man” TV series, died this year at 92.

The Old Hollywood estate is now owned by a trust tied to his family. Among its many highlights are a 500-square-foot movie theater with a 35-millimeter projection booth and a chic pool house designed by Paul Williams — the star architect who built homes for Frank Sinatra, Lucille Ball and Desi Arnaz.

Perched on a 1.2-acre promontory, the estate squeezes in a gated driveway, motor court, main house, pool house, brick courtyard, swimming pool, tennis court and a garden with mature trees and dense landscaping. The structures combine for six bedrooms and 7.5 bathrooms in more than 13,000 square feet.

Rent relief is on the way 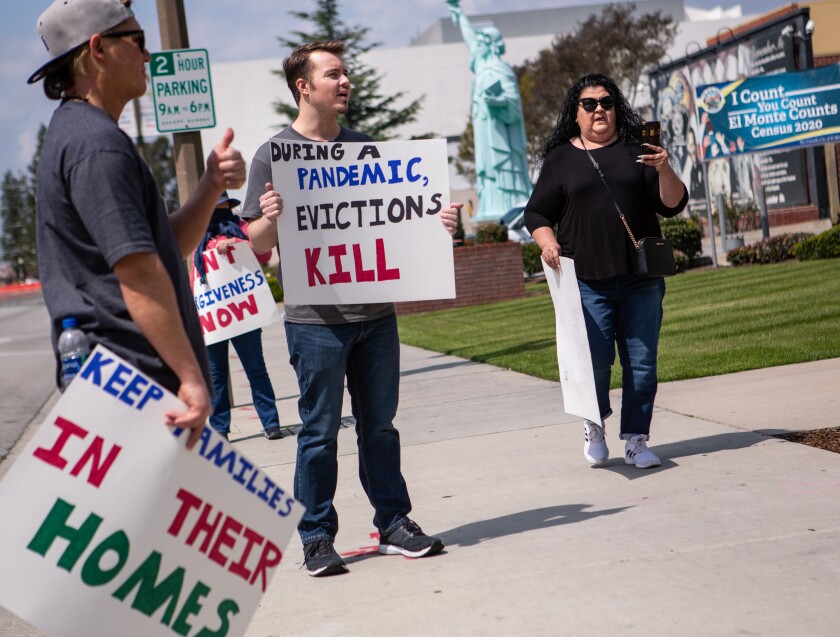 In March, tenants rights activists gather at El Monte City Hall to demand passage of an eviction moratorium during the pandemic.

Oct. 1 is a crucial day for California residents who have fallen behind on their rent because of the pandemic, write Jon Healey and Madalyn Amato. That’s when the state’s lengthy moratorium on evictions will start to expire, allowing landlords to seek the removal of tenants who have failed to pay what they owe.

Tenants will have to meet either of two conditions to avoid being tossed out:

The good news for tenants and landlords in Los Angeles is that they soon will be able to apply for the state’s Housing Is Key emergency rental assistance program, which can cover 100% of back rent as well as three months of future payments. Housing Is Key could help far more people than the rental assistance program the city offered earlier this year, which stopped taking applications at the end of April. Here’s what you need to know about the aid and how to apply for it. 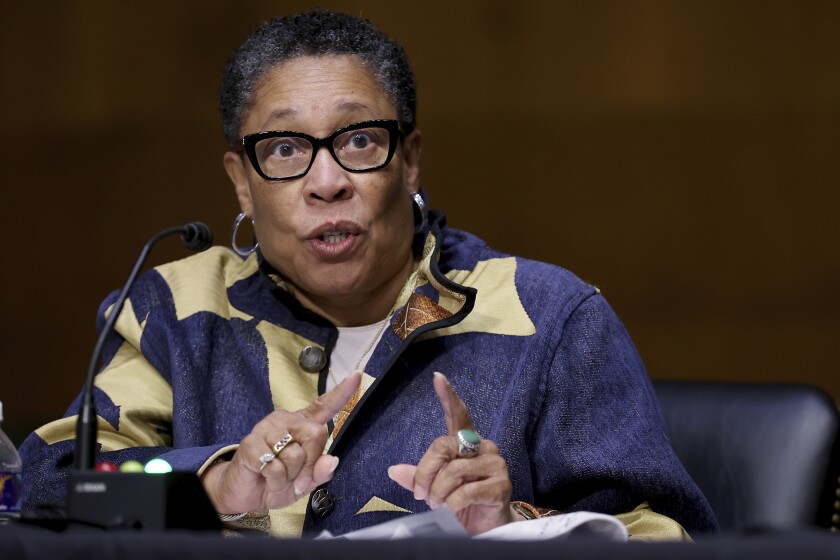 The Biden administration on Wednesday unveiled a plan to expand housing affordability through a slew of policy shifts projected to create and rehabilitate more than 2 million housing units, including 1 million rental units, nationwide as millions of people continue to find themselves priced out of the market, which surged throughout the COVID-19 pandemic, writes Erin B. Logan.

In July, the median home price was $359,900, an 18% increase from a year earlier, according to the National Assn. of Realtors. Researchers at the federally backed mortgage buyer Freddie Mac estimate that the United States is 3.8 million homes shy of what is needed to meet demand.

The Biden administration announced moves that would create, preserve and sell nearly 100,000 affordable homes over the next three years.

Housing Secretary Marcia L. Fudge tweeted Wednesday. “We will continue to pursue bold actions to create and preserve affordable homes for all Americans.”

Is this market a boom or a bubble? Experts told CNBC it’s a boom, with one source saying, “We say bubble because we can’t believe how much prices have gone up. A bubble tends to be something that’s inflated that could burst at any minute and change and that’s not really the case here.”

A famous gangster’s house is coming down in south Florida, where Al Capone’s home of nearly two decades is set for demolition. The current owner called it a “piece of crap,” according to the Associated Press.