Welcome back to the Real Estate newsletter. As home prices keep setting records, one hedge fund manager is seeing just how far he can go.

Bruce Kovner, an investor who also serves as chairman of the board of the Juilliard School, trotted his Carpinteria compound onto the market this week for $160 million. That makes it the priciest property currently available in California. (Well technically, this humble single-story home in the city of Vallejo is listed at $400 million as of Aug. 19, but I’m going to chalk that up to a clerical error — although I do respect the ambition.)

If Kovner gets his price, it’ll be the second-highest home sale the state has ever seen, just behind the $165 million that Amazon’s space-savvy co-founder Jeff Bezos paid for the famed Warner Estate in Beverly Hills last year.

Meanwhile, Michelle Pfeiffer got her price in the Palisades. She flipped a French-style manor for $25 million, or $2.75 million more than she paid for it last year.

It continues to be a seller’s market at all ends of the spectrum, as July data found that Southern California’s median home price soared to an all-time high of $681,750 — barely edging out the previous record of $680,000 set in June.

One antidote for the housing shortage is currently being discussed in Sacramento, where a housing bill would allow up to four new units on a single property. While significant, the bill is a relatively conservative effort in a string of so-far unsuccessful attempts by California lawmakers to create more housing density. California’s most expensive residential property isn’t found in Los Angeles County or the Bay Area, but the low-key beach city of Carpinteria. In the small oceanfront community, a 22-acre spread known as the Sanctuary at Loon Point just surfaced for sale at $160 million.

According to the Multiple Listing Service, the titanic price tag makes it the most expensive property for sale in the state, beating out a $135-million retreat up for grabs in Woodside and a $115-million glass mansion listed in Malibu.

If it gets its price, it will rank as California’s second-highest home sale ever. The current crown belongs to Jeff Bezos, who paid $165 million for David Geffen’s famed Warner Estate in Beverly Hills last year.

The Carpinteria compound is owned by Bruce Kovner, an investor and hedge-fund manager who serves as chairman of the board of the Juilliard School. Crawling across 22 acres of coastal bluffs, the staggering estate was assembled over the course of 14 years and consists of five parcels. Built in 2019, the French-style manor blends modern and Old World influences across more than 10,000 square feet.

Michelle Pfeiffer’s time in Pacific Palisades was short but successful. A year and a half after buying a French-style manor for $22.25 million, the actress and her husband, TV producer David E. Kelley, have sold it for their full asking price of $25 million.

Newly built when they bought it, the 10,000-square-foot mansion claims a third of an acre overlooking the fairways of the Riviera Country Club golf course.

According to the listing, the three-story home showcases “Old World charm interwoven with modern sensibility.” That design palette is best captured in the living room, where rustic beams and a wall of rough-cut stone touch up a sleek, indoor-outdoor space lined with pocketing doors. 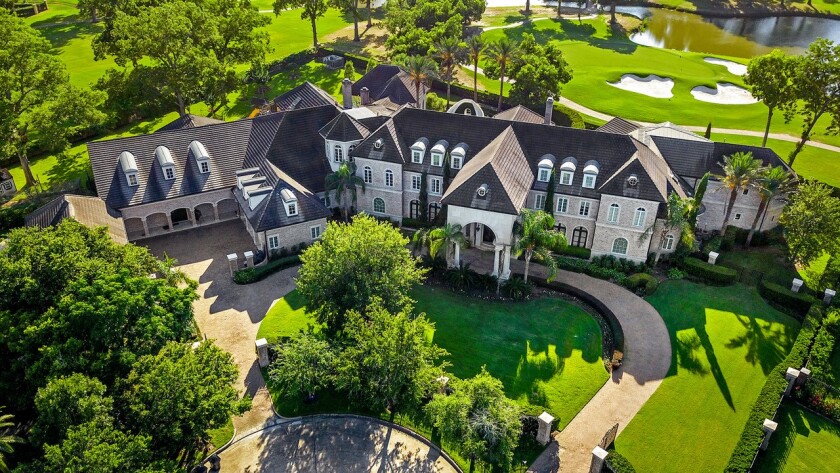 The lavish compound includes two homes, a basketball court, a barbershop and a custom swimming pool with a slide.

Tracy McGrady’s Texas mansion, like his basketball career, is well-decorated. The former Rockets star just listed the lavish, amenity-loaded home in the suburbs of Houston for $8 million.

McGrady, a seven-time all-star who was inducted into the Basketball Hall of Fame in 2017, has owned the property since his time with the Rockets. Spanning two acres in the city of Sugar Land, it holds a main house and guesthouse that combine for nearly 24,000 square feet.

A natural fit for a 6-foot-8 basketball player, the Texas-sized home boasts double-height ceilings, oversize closets and a full-size indoor basketball court complete with a barbershop and a spa. The laundry list of amenities also includes a game room, a movie theater, a gym, an elevator and a custom swimming pool with a water slide. A house for sale in Manhattan Beach.

Southern California home prices set yet another record in July, although the pace of increase slowed as some home shoppers grew tired of bidding wars that have defined the pandemic market, writes Andrew Khouri.

The six-county region’s median sales price — the point at which half the homes sold for more and half for less — reached $681,750 in July. That’s up 17.5% from a year earlier but lower than the 20%-plus gains recorded since April.

Sales rose nearly 10%, according to DQNews, the real estate firm that released the data Wednesday.

The housing market has been red hot since last year, with the pandemic unleashing several forces that boosted demand, including the desire for more space and rock-bottom interest rates. Under Senate Bill 9, up to four new housing units could be allowed on a single property in certain neighborhoods that are currently zoned for standalone houses only.

Legislation that would allow new multifamily housing developments in some California communities is shaping up to be the most significant housing bill in Sacramento this year, even though its impact on the state’s housing crunch would likely be limited, writes Ari Plachta.

Dubbed the “duplex bill,” Senate Bill 9 marks the most conservative effort in a string of so-far unsuccessful measures by Sacramento lawmakers in recent years to permit more housing density in single-family neighborhoods. Recent changes to the legislation, experts say, stand to further erode its homebuilding potential.

Despite the political muscle of its author, Senate President Pro Tem Toni Atkins (D-San Diego), strong opposition from groups whose pushback has helped scuttle more ambitious past attempts raises questions about the Legislature’s ability to address the state’s housing shortage if the legislation comes up short when lawmakers adjourn for the year on Sept. 10.

SB 9 would allow up to four new housing units on a single property in certain neighborhoods that are currently zoned for standalone houses only, but how a property owner could get from one to four is somewhat complicated.

Home Depot serves as a bellwether for the housing market, as more business means more people are building and renovating homes. The company thrived during the pandemic, but its latest earnings report came in well short of estimates, which could signal a drop in housing construction. CNN Business has the story.

In its latest video titled “How the U.S. made affordable homes illegal,” Vox looked at how exclusionary zoning rules have kept affordable housing from the people who need it in cities across the country. It’s worth a watch.