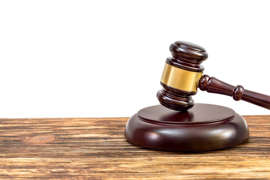 © LIgorko, Getty Images/iStockphoto Judge’s gavel with stand on the table

A real estate developer with close ties to Taylor Mayor Rick Sollars pleaded guilty Friday to allegedly giving gifts to Sollars and other city officials in return for getting favored access to buying tax-foreclosed properties in the city, according to a news release.

As part of his plea, Awad said he gave Sollars cash, household appliances, free renovations to his home and lake house, and other gifts in connection with the city’s Right of First Refusal program, Acting United States Attorney Saima Mohsin said in the release. State law lets cities have the first chance to acquire from counties any tax-foreclosed properties that are eligible for redevelopment, and the case against Sollars alleges that between 2015 and 2018 he steered to Awad the vast majority of Taylor’s tax-foreclosed properties in the city’s Right of First Refusal program.

Start the day smarter. Get all the news you need in your inbox each morning.

According to court records, between 2016 and 2018, Shady Awad paid for more than $50,000 in improvements Sollars’ home and lake house and gave at least $4,000 in cash to Sollars while Sollars gambled in Las Vegas. The renovations included new hardwood flooring, garage doors and front entrance doors, a deck and railings at the lake house, and kitchen appliances as well as a washer and dryer at Sollars’ home.

In Detroit: Councilman Andre Spivey admits he took bribes for help with towing

Bloomfield Township mansion has secret inside

In addition, court documents say Awad provided his credit card information to another developer interested in acquiring tax-foreclosed properties in Taylor and let that developer charge more than $19,000 to his credit cards, which the developer converted to cash and gave to Sollars.  All of the gifts were “in exchange for Sollars’ assistance in obtaining tax-foreclosed properties” through the city’s program, the documents say.

The bribery conspiracy count to which Awad pleaded guilty carries a maximum sentence of five years of imprisonment. Under federal sentencing guidelines, he likely will receive a sentence of 37 to 46 months as well as a fine of up to $250,000, according to Friday’s news release. Awad’s sentencing is scheduled for March 1.

It’s unclear to what extent Awad may testify against Sollars, whose trial is expected to start in January. Awad’s lawyer, David DuMouchel, declined comment Friday, according to a Detroit News story.

Sollars was indicted in December 2019 on federal bribery and wire fraud charges, accused of helping Awad’s company Realty Transition, according to previous Free Press reports. The lengthy indictment was unsealed nearly a year after FBI agents raided Taylor City Hall and searched Sollars’ house and vacation home. In the raids, agents seized more than $200,000 in cash from the mayor’s house, according to the previous reports.

Despite Sollars’ indictment, he registered to run for re-election in Taylor’s primary in August, although he was kept off the ballot after the city clerk determined that Sollars did not file campaign finance reports and owed thousands of dollars in late fees. As a write-in candidate, Sollars ran fourth in the primary, thus failing to be one of the two top vote-getters and qualify for the November election. One of the top two will be elected on Nov. 2 and be sworn in on the following Monday, according to Taylor’s city charter, pushing Sollars out of the mayor’s seat. The job that pays him about $108,000 a year, according to a city official.

After Awad’s plea, federal officials said they would continue with vigorous prosecution of Taylor’s current and former city officials.

“Today’s plea is a step towards ensuring that the citizens of Taylor receive the honest government services they are entitled to,” Mohsin said in the release. Added Timothy Waters, Special Agent in Charge of the FBI’s Detroit Division: “Mr. Awad’s investigation is proof of the FBI’s resolve to root out fraud and corruption in all forms.”