A look inside English Tudor for sale in Ho-Ho-Kus

What to watch next

Zaib Atyat purchased his first home in Paterson 20 years ago for $250,000. The three-family unit on the city’s south side offered a steady source of rental income and has progressively increased in value. Based on online calculators, Atyat, 47, estimates that his real estate investment is worth about $650,000 now.

“When I moved here, there was a lot of crime. Cars were stolen at night,” the immigrant from Jordan recalled. He lived near Paterson’s former Alexander Hamilton Public Housing Project, also known as Alabama Project, before buying a home.

From its past marred by urban blight, Paterson is emerging as a hot spot for real estate investment. Two of the city’s ZIP codes are among the fastest-appreciating areas for real estate sales in North Jersey, according to Zillow data between February 2020 and June 2021. The meteoric rise of Paterson’s two hot ZIP codes — 07501 and 07522 have seen appreciation of 32% and 26%. respectively — illustrates the shift in housing demands since the start of the COVID-19 pandemic last year.

Start the day smarter. Get all the news you need in your inbox each morning.

“You had Hoboken, Edgewater, now Paterson,” said Paterson Mayor Andre Sayegh. “We believe we are the new frontier.”

Paterson is close to New York City and near a number of highways, and it offers great diversity, Sayegh said. People are moving to Paterson because they are being priced out of New York City and other areas of North Jersey, he added.

Where the buyers are: ‘A seller’s market’: Here’s where home prices are soaring in NJ even as the pandemic fades 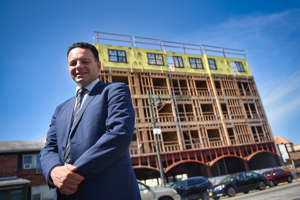 © Mitsu Yasukawa/ Northjersey.com Paterson Mayor Andre Sayegh standing in front of the retail and residential mixed development that is under construction along Main Street in South Paterson.

Walking down Main Street in Paterson, Sayegh is met with greetings of “marhaba” from his constituents — “hello” in Arabic. The son of Lebanese and Syrian immigrants, Sayegh is the first Arabic mayor of the state’s third-largest city.

Main Street is dotted with ethnic businesses with Arabic signage. The Chinese restaurant China Pagoda caters to Middle Eastern customers, offering halal foods with Arabic signage on its awning. Amid the brick row homes of yesteryear are new developments. A shopping plaza with parking now blends in with the older business district. A mixed-used development under construction will combine residential with retail.

Paterson developer Charles Florio has built almost 4,000 new apartments in Paterson in the past decade. Florio said most of those units house three to four people. Many of the new homes rose on locations where vacant lots and abandoned buildings had stood a decade ago, he said.

Beyond its proximity to New York City, Paterson’s real estate is buoyed by its low cost. The median price of homes in Paterson was $370,145 in July 2021 compared with $429,317 for all of Passaic County, according to the online real estate listing service Zillow.

Change is indeed happening where more than 40% of residents are foreign-born. It’s a diverse area where immigrants come to settle.

“Paterson has come a long way,” said Sharsan Abdrabbo, 61, who emigrated from the Palestinian Territories in 1996 and owns Nablus Sweets with his family, named after the West Bank territory.

As a business owner, he welcomes the new developments, which he hopes will bring new prosperity to the city.

“It’s for the better,” Abdrabbo said, noting that Paterson has been a welcoming place for immigrants.

“America has been good to us, but we are hard workers,” he said.

What to know: NJ housing guide: Everything to know if you’re looking to buy or sell a home in North Jersey

Passaic County: Looking to invest in NJ real estate? This in-demand county has a lot to offer

With growth comes displacement of vulnerable residents. Zellie Imani, 36, an organizer with Black Lives Matter Paterson, has been watching the changes. Homes go on the market and longtime tenants do not even get a chance to bid on them, he said. Rents are rapidly increasing. A two-bedroom in a multi-family fetches about $1,900 now in monthly rent, and they are in crime-ridden areas, Imani said.

“What we know as growth we recognize as a push out,” Imani said. “Working-class people are being pushed out.”

Sayegh doesn’t view the development as a push out or gentrification. The people who are moving into the city are immigrants: Dominicans, Palestinians and Bengalis, he said. They are being priced out of other areas, such as Newark. The median household income in Paterson in 2019 was $41,350. Paterson saw a population growth of 9%, according to the 2020 census.

READ  Is real estate a stable investment for your retirement portfolio?

Paterson is very much a city separated by ethnicity, with each group fighting for its own stake, Imani said. According to the 2020 census, whites make up 14% of Paterson’s population, Blacks 25%, Hispanics 61% and Asians 3%. The number of whites fell 55% from a decade ago and the Black population fell 14%, while the Asian population grew 67% and Hispanics grew 17%.

The divisiveness is counterproductive to progress, Imani said.

Paterson has a rich history with many historic homes that attract buyers, said Max Stokes, a real estate agent at Christie’s International Realty in Ho-Ho-Kus. With the influx of buyers coming from the five boroughs, where multi-family dwellings are more common, New Jersey localities such as Paterson and Hackensack are attracting home buyers and investors, he said.

“I am seeing investors buying in those towns looking for yield and appreciation making bets due to major redevelopments in process,” Stokes said.

While Imani is watching the development in Paterson and looking out for the underserved, he also realizes why the city is popular.

“People who recognize that this is a potential hot spot are making their investments now,” Imani said.

Sayegh is promoting Paterson as a destination — with its Great Falls on the Passaic River, its food and its future.

That plan going forward is exciting for Renita Gordon, an immigrant from Jamaica who has lived in Paterson for 18 years.

“I’ve seen the changes,” said Gordon, 43, who lives in the Eastside neighborhood and works in the medical field. “It’s multicultural and I feel comfortable. I love the town.”

Joe Malinconico of Paterson Press contributed to this article.

Mary Chao 趙 慶 華 covers the Asian community and real estate for NorthJersey.com. To get unlimited access to the latest news out of North Jersey, please subscribe or activate your digital account today.

This article originally appeared on NorthJersey.com: Gentrification or growth? Why Paterson is hot for real estate buyers and investors